Helen Hardy’s unmistakable singing voice adds power and soul to everything it touches. 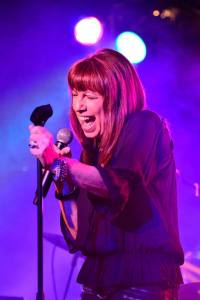 Whether as a long term member of British folk rock band “Cold River Lady”, signed to Worldwide acclaimed heritage label Angel Air Records, or recording and performing live with some of our progressive rock favourites of the 70’s including; Roger Chapman and the Shortlist, The Pete Brown Band, Jack Bruce, Bernie Marsden, The Arthur Louie Band, Trust, Sniff’ n the Tears and Gilbert O’Sullivan, Helen’s self-assured, soulful performance and poignant voice lead to her taking center stage with these bands and now finally, in her eagerly awaited self titled band.

Helen’s musical journey introduced her to the talented session musicians that make up the rich and soulful sound of the Helen Hardy Band. Individually the band have spent their lives touring and recording with various bands and artists including; Eric Clapton, Dave Gilmore, Paul Rogers, Roger Chapman, Tina Turner, Andy Fairweather Low, Joan Armatrading, The Yardbirds, Pete Brown, The Sensational Alex Harvey Band, Tom Robinson, The Baker Brothers, Cregan & Co and many more. Sharing Helen’s love for the more “left field” blues, funk and soul music, the band deliver their own unique take on an eclectic array of tasteful songs based around the music they live for and love.

The Helen Hardy Band are currently recording their first record with long term friend and colleague, Dennis Weinreich (Queen, Supertramp, Blancmange and Wham) and on the live circuit they have been making their mark supporting legends such as Lonnie Liston Smith and funk masters Brother Strut. For live music with sophisticated soul and unbeatable groove The Helen Hardy are bringing a new life to music that will live for ever.

The band can be anything from 5 to 10 piece, according to the venue – musically they are all about feel, improvisation and energy..